Yu-na had one fall in an otherwise assured free-skate routine ending a 19-month sabbatical with 201.61 points, 72.27 awarded for the season’s best short on Saturday.
Kim Yu-Na  at just 22 years old was competing to secure a place at next year’s world championships.
Kim Yu-Na said “I’m happy that I could reach my goal today,”  Yu-Na only needed 28 points from the short program and 48 from the free skate long to ensure her participate in London, Ontario, Canada.
Yu-Na, known as ‘Queen Yu-na’ hadn’t competed since the world championships in Moscow April 2011, creating an unprecedented demand for tickets to see her return to ISU competition standares, the modest 200-capacity venue sold out of tickets in a couple of hours and additional security had to be drafted in for the first time in six years to cover the event.
Yu-Na started her routine to music from Les Miserables, with elegant poise and grace, launching herself fearlessly into high speed jumps to land them like a feather with gliding softness.
Yu-Na landed six triple jumps, a triple Lutz-triple toe combination and four triple jumps faultlessly, but uncharacteristically stumbled on a double toe loop, however, Yu-Na’s routine still earned 129.34 points, 22 points in front of Japan’s Satsuki Muramoto. 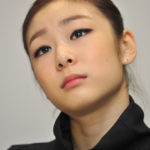 Yu-Na did not compete 2011-12 season following the breakup with her coach Brian Orser shortly after the games in Vancouver. In July Yu-Na announced she would return this year but planned to retire after the 2014 Sochi Games,
“About Sochi, it’s not too far away, but this season only just started so I’m going to focus on the season first and think about that later. After this I’m going to return to Korea and focus on the Korean national championship, preparing for that. Since entry to the Olympics depends on it, I’m going to prepare very hard for it, not just for me but so all the other young skaters in Korea can also gain entry to the Olympics,“ said Kim Yu-Na.
This is very good news short term, but what a shame about Yu-Na’s plan to retire as a young fit 24 year old in 2014. 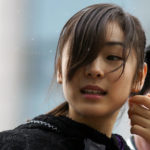 Many had feared the breakup of the so called dream team, with Canadian coach Brian Orser and choreographer David Wilson may have ended Yu-Na’s career. The Dream Team rocketed Kim Yu-Na to Olympic Gold in Vancouver and was instrumental in polishing her performance to brake world records.
Yu-Na seemed to of had an unsettled time afterwards and then sadly, surprisingly dropped out of competition skating either before or after parting with replacement coach Peter Oppegard.
Yu-Na Kim has now thankfully reunited with two of her childhood coaches, Shin Hye-sook and Ryu Jong-hyun and Yu-Na still works with David Wilson.